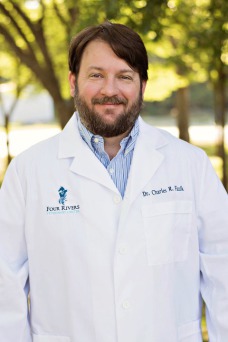 A life-long animal lover, Dr. Faulk knew at an early age that animals would always be an important part of his life. In fact, the only thing that rivaled his love of animals was his love of science. As owner and chief veterinarian at Four Rivers Veterinary Center, he is able to combine these two passions while helping people and their pets.

Born and raised in Georgia, Dr. Faulk received his Bachelor of Science in Agriculture (BSA) from the University of Georgia in 1997 and his Doctorate of Veterinary Medicine (DVM) from Ross University in 2002. During his final year of veterinary school, Dr. Faulk attended Oklahoma State University, where he received training in equine and farm animal medicine. He returned to Vidalia in 2002, where he began practicing at a local animal clinic and where he has provided care to both large and small animals in the area for more than a decade. He is a member of the American Veterinary Medical Association and the Georgia Veterinary Medical Association.

In his free time, Dr. Faulk can typically be found paddling the rivers in the area or getting lost in a good book. He and his wife, Tiffany, reside in Vidalia. They are the proud parents of two children (Emilia and William), two dogs (Butch and Fiona) and a cat (Nadya).

Dr. Perry joined the Four Rivers family in January 2014, bringing with him more than two decades of veterinary experience. A native of Waycross, he received both his bachelor's degree and his DVM from the University of Georgia. He is a member of the American Veterinary Medical Association and the Georgia Veterinary Medical Association. Dr. Perry and his wife, Joann, reside in Vidalia and are the proud parents of two sons, Stacy and Dean, and their two dogs, Puppy and Ferdinand (Ferdy).

Dr. Perry is currently seeing patients by appointment in our Baxley office and is also available for appointments in our Vidalia office on Fridays. 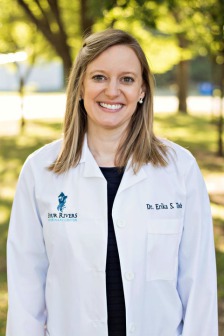 In her spare time, Dr. Tootle enjoys reading, hiking and spending time with her family. She and her husband, Aubrey, reside in Vidalia with their sons, Wyatt and Wynn, two dogs (Chissi and Alis) and two cats (Mowgli and Motor).

Get Social With Us